Baroball control valve facilitates the passive removal of vapors from the unsaturated soil zone. This product is used for Passive Soil Vapor Extraction (PSVE) and in situ bioremediation. 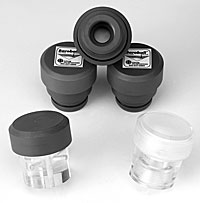 The Baroball is a valve that makes it possible to harnesses natural atmospheric pressure fluctuations to create a pumping method that passively removes vapors from the unsaturated soil zone (Passive Soil Vapor Extraction).

This technology has been demonstrated to increase removal rates by up to 50%. Natural atmospheric pressure fluctuations are transmitted through the unsaturated subsurface resulting in pressure differential between the surface and subsurface. When the zones are directly connected by a well placed in the vadose zone, the pressure differentials will result in flow into or out of the well.

Simply put, this product is a check valve that is installed at the top of the well casing to permit gas flow in one direction. The Baro-ball has been used in conjunction with the FAP Plus systems to increase removal rates during LNAPL recovery. Other applications include the final polishing for an active SVE system where removal rates have been substantially reduced to the point where SVE system operation costs are very high. Inverted Baro-ball installations have been used to allow air flow into the subsurface, but prevent air escape to improve in-situ bioremediation.

This product has also been used to provide plume control of methane production at landfills. 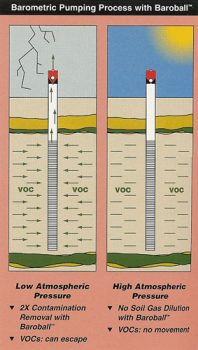