New Zealand: Deep in a remote area of New Zealand's South Island, a tunnel boring machine has worked its way through two kilometers of some of the hardest rock ever tackled by a "main-beam" TBM. This is the Second Manapouri Tunnel Project, a ten-kilometer long, ten-meter diameter tunnel that in two years will increase the generating capacity of the Manapouri Underground Power Station.

The station takes fresh water from Lakes Manapouri and Te Anau via seven vertical penstocks to seven generators, and then discharges it into sea at Doubtful Sound, through a tailrace tunnel. The new tunnel will supplement the existing tailrace tunnel, increasing thoughput from 460 cubic meters of water per second to 510 cubic meters per second.

Slope Indicator instrumentation, supplied by Geotechnics, Ltd of Auckland, NZ is being used extensively on the project. Five inclinometers were installed in the area of the downstream portal, at Deep Cove. Two are monitoring the stability of a stopbank adjacent to the portal, while the other three are monitoring potential deformations of the tunnel waste rock stack nearby. No significant movements have been recorded to date. The importance of the data generated by these instruments is extremely high, given that the area is within Fiordland National Park, a World Heritage Area. Deep Cove is at the head of Doubtful Sound, known for its marine and submarine wildlife. 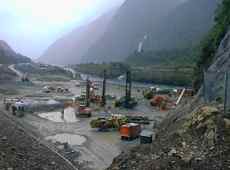 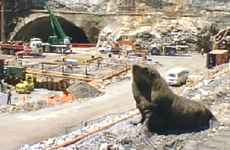 Other instruments currently in use are a tape extensometer, used for convergence measurements within the tunnel and thirty VW piezometers. Some of the piezometers are being used to monitor ground water levels in the vicinity of the portal, and others have been installed in or near the 18 dewatering wells that keep the entrance of the tunnel from flooding. Lives depend on the effectiveness of these instruments, since the low point of the new tunnel (and currently the only way in and out) is some 43m below the sea level at the portal.

The VW piezometers are continuously monitored by Campbell Scientific CR10 dataloggers that are programmed to initiate various alarms, ultimately including an alarm to evacuate the tunnel. Three multi-point rod extensometers and ten 3D crackmeters have been purchased for use in the tunnel at a later stage. Readout equipment includes a Digitilt Datamate and Digitilt inclinometer probe, a VS Datamate, the tape extensometer, micrometers, and dial gauges.

The project was initiated by the Electricity Corporation of New Zealand and is being carried out by a Fletcher Dillingham IIbau, a New Zealand - United States - Austrian joint venture.

Geotechnics LTD (Slope Indicator's New Zealand agent) were awarded the contract against stiff competition to provide an independent testing laboratory for the project. They also have been primarily responsible for the installation, monitoring, and maintenance of all of the instrumentation, and for regular reporting and advisory roles.