New York City, USA: The New York City subway is the 4th busiest in the world, serving 4.3 million passengers each working day.* In 1982, the NYC Transit Authority began a massive rebuilding and rehabilitation program to update the system.

As part of this on-going program, the Transit Authority is rehabilitating nearly half of its 199 fan plants, which are used to move fresh air through the subway. Work has now begun on the 53rd street fan plant, which is just south of Central Park.

Here the subway is about 43 feet below street level. The work involves removing and replacing the walls and floors of the old structure, excavating to enlarge the intake shaft, and installing the new fans. And of course, the subway must continue to carry passengers while the excavation and heavy construction takes place.

Instrumentation was installed to monitor stress changes in both the old and new parts of the structure. VW strain gauges were installed on the steel beams and struts in the fan plant and the exchange chamber next to the subway tunnel. Four Bassett Convergence systems, as shown in the photograph were installed in the portion of the tunnel that runs beneath the excavation work. The Bassett systems monitor deformation of the tunnel section. In addition, a twenty-meter long string of EL beam sensors was installed along the crown of the tunnel, to monitor differential movements. 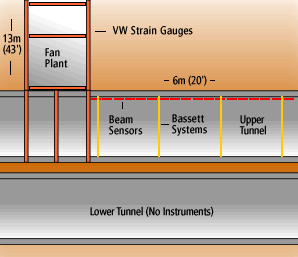 All of the instrumentation is connected to CR10X data loggers. Readings are retrieved by modem every hour and then processed and displayed by MultiMon software at both the site office and the office of the consulting engineer. The screen shot below shows the profile plot from the four Bassett systems.

A similar instrumentation scheme, with four Bassett Convergence Systems and a string of EL beam sensors, has been installed at the 143rd street fan plant.

Thanks to John Wang, of Wang Engineering, Cranberry NJ and to Pierre Gouvin for providing this story. Also thanks to the New York Metropolitan Transit Authority for the photograph of a New York subway train and for the subway facts listed here.