Brisbane, Australia: A cut-and-cover tunnel will soon pass close by a century-old city landmark, the Breakfast Creek Hotel. The "Brekky Creek," known for its wooden kegs and great steaks, has has been one of Brisbane's favorite eating and drinking spots since 1890.

The proposed route of the tunnel, part of Brisbane's Inner-City Bypass project, will also pass close to other large structures in the area, all of which are constructed on soft clays, 20 to 30 m deep. Before finalizing the design of the project, city engineers have been collecting background data to determine how ground water levels in the area respond to tides and other factors.

The Geotechnical and Environmental Engineering group of City Design installed sixteen VW piezometers to monitor ground water levels. Seven of the piezometers were placed at an average depth of 22 meters, at the top of the underlying rock and the base of the alluvium. Another seven were placed 8 meters down, at the the invert level of the proposed tunnel. One piezometer was placed at 3 meters and the last was placed adjacent to the proposed S1 Sewer line.

At one location, three piezometers were installed in single borehole and connected to a multi-channel data logger. The logger was set to record at half-hour intervals to provide data for plotting the tidal influence on ground water levels over an extended number of tidal cycles.

Because of site conditions, the piezometers had a slight positive buoyancy and had to be weighted. To do this, engineers fabricated an outer cover of slotted PVC pipe and filled it with 0.5 mm sand. Each of the three piezometers had a 1-meter intake zone formed of gravel and isolated from the other zones by 1.5 meter plugs of bentonite above and below each zone.

Thanks to Gary Bruyeres, Ground Engineering Senior Geotechnical and Environmental Technician, for providing this story. Gary ends the story saying, "The next time you are in Brisbane, you can shout us all a beer off the wood." 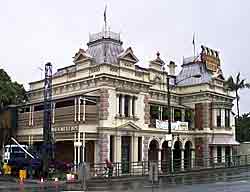