Guayaquil Tunnels, Ecuador: Two highway tunnels, each designed to carry three lanes of traffic, were constructed through the Santa Ana and Carmen mountains that divide Guayaquil's city center from its suburbs to the north of the city.

The tunnels passed through heavily weathered Lutite rock, which ranged from Type V at the portals to type II or III (Bieniaswaski RMR) at the core. This material has little cohesion, and during the heavy rains of Ecuador's three month wet season, is prone to excessive water percolation.

In sections with the poorest rock quality, the top heading excavation had to be preceeded by construction of a shield of horizontal micropiles, 12 meters deep, with a 3-meter overlap. Long fiberglass face nails were installed to improve stability.

Other sections of the tunnel were stabilized by a shield of 150 mm steel pipes, heavy reinforced steel arches, and up to 200 mm of fiber-reinforced shotcrete.

All the excavations in the project were done with Volvo machines in a top heading, bench, and invert sequence. These machines used big Montabert hammers to break the rock and load 14 cubic meter dump trucks.

The project, which was undertaken as a joint venture between OHL of Spain and SEMAICA of Ecuador, was completed in 30 months. Ing Francisco Molina was the project manager and Ing Mauricio Martinez was the technical manager. Slope Indicator provided field services.

Thanks to Ing Mauricio Martinez for providing this story and the photographs. 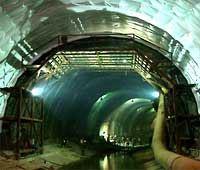 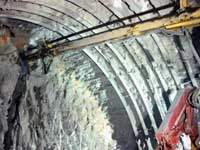 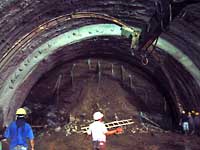