London, England: Instrumentation and real-time monitoring played a significant role in the construction of the new parliamentary building, Portcullis House. Located across the street from Westminster Palace, Portcullis House provides seven floors of office and meeting space for 450 members of parliament and their staff.

One of the challenges faced by architects and builders was the presence of underground railway tunnels that cross the site. These include cut and cover tunnels for the District and Circle Lines and, at a lower level, the tunnels and station for the Jubilee Line. The building had to be designed so that it did not load these structures.

Architects met this challenge by using the diaphragm walls of the station below as the foundation for the outer perimeter of the building. In addition, six large-diameter columns were built up through the station to support a system of tied arches that would distribute the load of the courtyard walls. Finally, corner slabs and cores would be suspended on hangers from massive transfer structures in the roof.

As a consequence, much of the building would be supported by temporary bracing during construction. Only when the transfer elements in the roof were ready could loads be transferred to the permanent load bearing structures. A very detailed plan was developed to guide this process. The compression, extension, and movement of the various elements had to be modeled by computer. Deflections of the temporary bracing had to be compensated by jacking, and all of the elements had to be carefully positioned so that they would move into their designed locations when the full loads were finally transferred.

Instrumentation was used throughout this process. Two hundred EL beam sensors were installed on the first, fifth, and sixth floors to verify that they were level during the transfers. You can see the protective housing for the beam sensors in the photo and a typical layout in the screen shot. Beam sensors are shown in red and data in green. A liquid level system provided an external datum elevation which was extended by 18 rod extensometers from the 1st floor to the floors above. Twenty EL tiltmeters were used to check the verticality of the hangers from the corner transfer structures, and VW strain gauges were used to monitor strain in the steel ties used in the arches.

Since it was important to collect and process readings from the sensors in near real time, the sensors were connected to a number of Campbell Scientific data loggers and processed with MultiMon software.

Construction of Portcullis House was begun in January 1998, and MPs moved into the building in September 2000.

Thanks for this story go to ITM Ltd , instrumentation contractors, and to Dr Hai-Tien Yu of Slope Indicator. 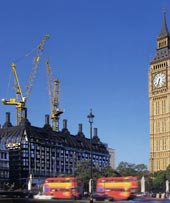 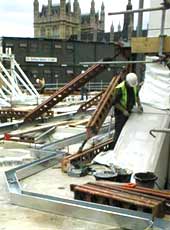