Monitoring Renovation of a Structure

London, England: William Shakespeare's plays were first performed at the Globe theater some 400 years ago. The original Globe was destroyed by fire and when it was rebuilt, William Shakespeare became a partner in the theatre company as well as its most famous playwrite. Closed by the Puritans in 1642, the Globe was eventually torn down and lost to history.

A replica of the Globe was completed in 1994 by the Shakespeare Globe Playhouse Trust. This organization secured property only 200 meters from original site and reconstructed the theatre from sketches and other records, including recently discovered remains of the foundations of the theatre. Traditional techniques and material were used in the reconstruction, except for a sheet of fireproof material embedded in the walls between layers of plaster. Of course, modern ground improvements were necessary, and these included construction of a 300 meter-long diaphragm wall between the property and the Thames river.

As the theatre itself neared completion, work began on an adjoining visitors center and a series of shops. In London, as in other mature cities, any new construction almost always affects neighboring buildings, and city ordinances mandate that adjacent structures be monitored for damage due to the construction activity. In this case, a tall brick wall, about 10 meters high and 60 meters long, had to be monitored for rotation and deformation as a supporting structure was removed and another built in its place.

RealMon, the DOS predecessor to MultiMon , was set to trigger an alarm if rotation or deformation exceeded 0.8 mm. String 1 in the RealMon plot at left shows an alarm condition. However, the visitor's center was completed successfully without incident.

Thanks to Dr. Hai Tien Yu for providing this story. 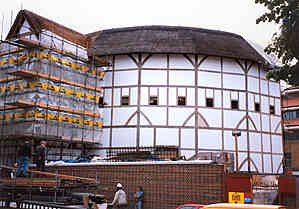 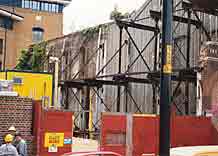