Bonn, Germany: Here on the banks of the Rhine river, a 48-story tower is under construction. It is the new headquarters building for Deutsche Post, the German post office.

The tower will stand on a reinforced-concrete slab supported by sixty piles. The piles, 1.5 meters in diameter and 15 meters long, were cast into borings that pass through alluvium to limestone bedrock below. To verify that the piles and slab would perform as designed, an instrumentation system had to be installed. The builders, Hoctief AG, chose Interfels for this task.

Interfels instrumented ten of the sixty piles with specially-designed pile pressure cells, shown at left. The cells have a diameter of 1.3 meters and are filled with hydraulic oil. Vibrating-wire pressure transducers manufactured by Slope Indicator measure the hydraulic pressure in the cell.

Concrete beds were formed at the bottom of the borings for the two fully instrumented piles. Then the reinforcing cages were lowered into the borings and concreted. The bottom cell on each of these piles was sandwiched between two load-distribution plates, and a large concrete lens was attached to the lower plate. A thick rubber ring was vulcanized to the outside edge of the lower plate to prevent bonding between the plate and the concrete so that loads pass directly through the cell.

As the slab was built, Interfels installed twelve earth-pressure cells at the interface between the foundation soil and the slab. The 3.5-meter thick slab will weigh 22,000 metric Tonnes when completed. Eventual loads on the piles are expected to reach 20 MN at the top and 10 MN at the bottom. Loads on the earth pressure cells are expected to reach 500 kN.

At the time of this writing, the slab is nearly finished and the instrumentation has confirmed the activation of the piles. Later, all instruments will be connected to a CR10X data logger, and the system will continue to monitor the foundation until completion of the project in 2002.

Thanks to Juergen Kienle for providing this story. 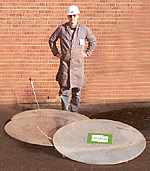