Taipei City, Taiwan: The Taiwan Taoyuan International Airport Access MRT System will provide a high speed, convenient connection between Taipei City and the Taiwan Taoyuan International Airport. Express trains will make the journey in 35 minutes. The route is 51.5 km long with 6 underground stations and 15 elevated stations. Construction began in 2006 and will begin service in 2014.

Most of the route is elevated, passing through densely-populated urban districts and also through rural areas with steep slopes. Taipei City Section CA450A, shown in green here, is one of the most challenging sections of the route. About 4 km long, it includes not only a viaduct, but also a 1.5 km long, double-O-tube tunnel that passes under the Danshui River.

To ensure public safety, the designers mandated an extensive, automated monitoring system. The system includes multiplexed in-place inclinometers, MonoPod tiltmeters, and EL Beam Sensors. These were installed in the area shown by the red circle.

Multiplexed IPI Sensors are being used to monitor lateral displacement of soil behind a diaphragm wall to ensure construction safety. The IPIs will report the depth, magnitude, and direction of any movement that occurs.

EL MonoPod Tiltmeters are mounted on bridges, piers, and temporary steel shoring to monitor tilt due to excavation and loading of the foundation soil.

EL Beam Sensors, are mounted on the Central River viaduct, between piers P63 and P65 to monitor any subsidence. The beams are linked into a chain that is 220m long.

Thanks to San Lien Technology Corporation for supplying this story. San Lien specializes in system integration and distributes Slope Indicator equipment in Taiwan. 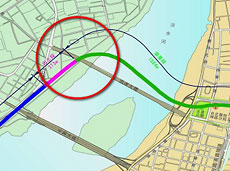 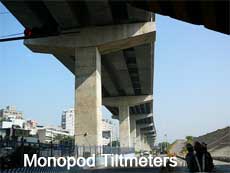 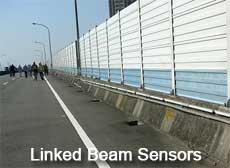