Colombia: Porce III is a hydro power project located in the Department of Antioquia, Colombia. The project, on the Porce River, includes a 155 m high CFRD dam with a crest length of 426 m. The dam has a chute located in the left abutment with a discharge capacity of 10,850 m³/sec and is controlled by four radial gates and a flip bucket for energy dissipation. The dam retains a reservoir with a storage capacity of 647 Mm3. When completed, the project will feature a diversion tunnel, vertical shaft, headrace and tailrace tunnels and an underground powerhouse. In addition, the station is slated to have four generation units with a total installed capacity of 660 MV.

Sensor cables are connected to seven terminal boards, with six of them mounted on the crest of the dam and divided into two groups of three; one group near the left abutment and the other to the right. The remaining board was fixed downstream of the dam.

Each terminal board has 11 to 24 sensors connected to a Campbell Scientific CR1000 datalogger paired with multiplexers and an NL115 Ethernet interface. Breakers, terminal blocks, surge protectors and grounding busbars protect the instruments and components from damage due to surge. Each board was made according to protection standard IP65.

The instrumentation takes and records readings every 60 minutes and also during the filling of the reservoir every 10 minutes. Each datalogger was configured to work with LoggerNet and was additionally connected to a network to collect data every hour.

The accelerometers are used to monitor earthquake events and to activate the dataloggers for rapid data collection during a seismic event. Seismic Information is collected on different systems to provide redundancy In the event of an earthquake. This was done so geotechnical engineers will have information to present to the state in case damage occurs to the structure.

The monitoring program was developed specifically to monitor the dam. It is searchable and also operates on a network. This web-based application allows files to be downloaded, records processes, and presents data in a graphical form for each sensor.

Thanks to Eduardo Munar F. ( emunar@eyr.com.co ) of Espinosa y Restrepo S.A. ( www.eyr.com.co ) for this story and the site photographs. 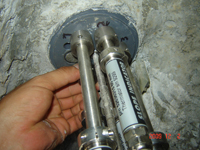 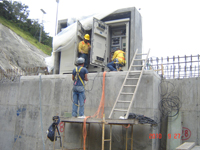