Germany: The Ennepetal Dam was built on the Ennepe river in 1904 to secure a water supply for the Gevelsberg area. The masonry dam, which has a span of 320 meters and a height of 50 meters, supplies about 9 million cubic meters of water annually.

Now, as part of a dam rehabilitation program undertaken by the German government, the dam is being renovated and equipped with modern instrumentation. The renovation work included construction of a drainage tunnel within the dam. Interfels GMBH, Slope Indicator's sister company in Europe, was chosen to supply and install the instrumentation.

The instrumentation included twenty-eight VW piezometers, which were used to monitor water pressures within the dam, two inclinometers to monitor the stability of the upper part of the dam, thirty-five temperature sensors to help monitor water flow, and three v-notch wires with ultrasonic readouts to measure the volume of water being drained. Four pendulum systems with laser readout are scheduled for installation on either side of the spillway. Two hanging pendulums will be suspended from the top of the dam, and two inverted pendulums will extend 20-meters into the dam foundation. Instrument readings are collected automatically by three data loggers that are linked by fiber-optic cable to a nearby processing station.

Interfels is based in Bad Bentheim, Germany. The company is also involved in the instrumentation of six other dams. 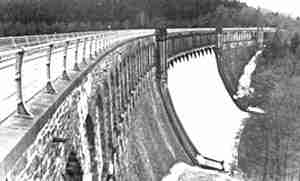